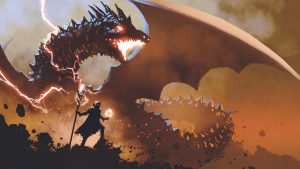 The latest cutting-edge technology is creating a revolution in the exciting world of gaming. High tech is incessantly driving technicians to be more creative and innovative; and these days, the “Power of Playing Games,” goes way beyond pure entertainment. Playing games help gamers create a broad spectrum of essential, and useful, necessary mental skills, such as computational thinking, resource management, planning, risk-taking, communication, and problem-solving. This is really not too shabby at all!

A famous man known as Ian Livingstone is regarded far and wide, as the original pioneer of today’s unique gaming culture. During an in-depth interview, Ian had a lot to say about the fascinating history of gaming and how digital technology is having a huge knock-on effect on players’ behaviour.

When asked about how he thought up fantasy games, Ian noted that way back in the 1970s, he used to love fantasy and science fiction novels and had lots of comics. So, these allowed his rigid mind to escape into all kinds of exciting realms. In the mid-70s, Ian began playing D & D (Dungeons & Dragons). In fact, he became really preoccupied with it and was mindful that when it came to gaming genres, fantasy was incredible, as it frees our limited imaginations.

While playing fantasy games, Ian realised that players could enjoy endless adventures in countless unusual and daunting situations and environments. These could involve magic, evil, danger, heroism, monsters, other worlds, aliens, being the bad guy, being a hero, and so on. He was a child who never grew up, just like so many gamers of today. And just the same as the grown-ups you see, always looking at their smartphone, to check out which new app they want to download. And as new apps are coming out every day, ensuring you have the best ones at hand is crucial!

Right now, in the UK, there are more than two thousand studios which specialise in video game development. A lot of them are just tiny studios; however, if they persevere, they are likely to do very well, due to the demand all over the world. And now that we all have mobile phones, many of us have found to our delight, that playing games really spices up our journeys to and from work on the bus or train, or whenever we are just sitting around, waiting for someone, and so on.

Having fun gaming encourages our creativity and boosts our imagination. Games are also an excellent hub for contextual learning. Ian states that many people feel that it is impossible to have fun and learn at the same time. But this has been proved wrong time and time again. In fact, right from childhood, if we have fun learning things, we generally enjoy the experience far more, and that can help us learn and retain what we have learned. So gaming is highly beneficial!